Having seen these on a few YouTube channels, I decided I needed one! 😎 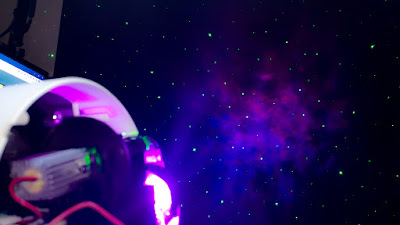 See the Amazon Video - For a demo of this 'Nebula Light'

While having a remote control made it easy to site and turn on/off. There was very few variations, I.E. Just three levels of brightness and Speed so, It needed more control!!
One other consideration was the Laser life-span. Green Lasers can have a relatively shorter life than say Red lasers, and so it was important to be able to dim it more.

First thing to do was reverse engineer the circuit - in order to replicate signals coming out of the existing micro-controller. Once done it was time to get the soldering iron out and pull the existing chip off the board.
As with most micro-controllers, the output of these is 3.3v logic and that's the same as the Espressif ESP that was to replace it.

Wires soldered to the pads where the controller was gave inputs for each of the:

First an ESP32 DEV board was programmed with ESPHome, thinking it needed hardware PWM signals. However, after testing, it turned out a D1 Mini's software PWM was sufficient! YAY! 💥
So, 'A Few Moments Later' a D1 Mini was programmed with an RGB Light for the LED's and two 'Monochromatic' lights for both the Laser and Motor. So yeah... That worked! 👍
After a few dabs of hot glue, the hardware was done... 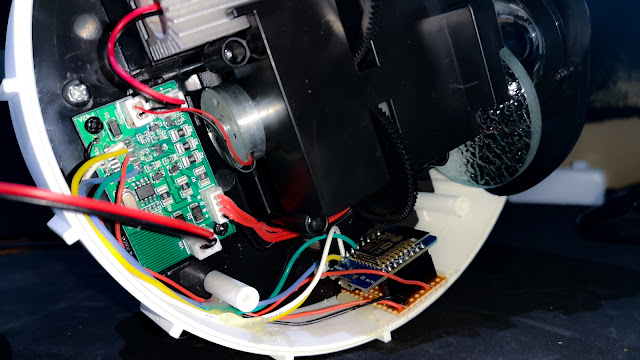 So now in Home Assistant there are three 'Lights', while this gives full control over everything this Nebula Light can do, it's not ideal for manual control and that needs more thinking. 🙄

Of course, automating this light is now possible using; Scripts, Scenes, Node-Red, Etc. With some more work to find a solution for easier manual control and then Alexa voice commands !

As soon as that's all worked out, a full hardware, software and control tutorial will be released.


As part of the 'Just the Tip' playlist and weekly update aimed at Tuesdays.
... And so starting:

I made a quick-tip for manipulating Node-Red 'Wires'. In this tutorial I show how to move and re-connect those single and multiple wires between node - Saving loads of effort when building, testing and refining your Flows.


My I present... "Custom Button Card Part: 3"
In the 3rd episode of this tutorial series, I take the Button card to the 'Max'. 😎
Extending from Part 2, I show you how to do even more - with fancy boarders, that change between on & off states... to background images and even moving video for the button!!!
Finally, I show you how to do keyframe animation... yes, that's right, adding complex animation to virtually any aspect of the card, text and icon.