One step closer to Vlogging


As some of you may know I've been trying to buy a lighting set up on eBay - You know the ones with CFL bulbs and soft-box diffusers on stands. 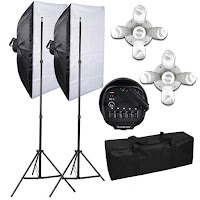 And what a hassle it was too! I found a seller based in China but, sold from a warehouse is Portsmouth, UK. Excellent I thought, they'll be here in a few days... Sadly not!
On the first attempt, the lights were send out and I was given a Royal Mail tracking number. So I started tracking the order to make sure I was about the receive them.

Day One:
They leave the warehouse and head to a distribution centre in London - All good!

Day Two:
Having left the London over night, they arrive at the sorting office in Chelmsford. However, that's when it starts to go wrong.

Instead of leaving Chelmsford and heading down to my local sorting office in Southend, they just stay at Chelmsford and the tracking data on-line reports: "Sales Order Raised"

Day Three:
I call Royal Mail and ask what Sales Order Raised means and get some woman (who obviously had way too much coffee that morning) started answering me before I finished asking the question. Then continued to talk over me at every stage. After, I asked her to shut up and allow me to finish a sentence at least once, she went silent. After all that,  I was told "..your parcel is on its's and will be delivered in a day or so..."

Day Four:
Another day of starring at the tracking data on-line show my lights are heading back to Portsmouth!!!! Then get "Delivered, no signature" in Portsmouth, my guess, they went back to the warehouse.

Day Five:
I contact the seller (In China) and ask what happened. A day later a reply saying they would look in to it...

They have no clue why my lights weren't delivered. I confirmed my address and they try and tell me that Royal Mail doesn't recognise my address with my Postcode. Not true, Royal Mails postcode checker confirms that both my address and postcode are linked. I even spoke to them to make sure... not that I needed to, I've lived here for 20-30 years without a problem.

At this point the eBay seller has refunded me and I order a new set from them. We confirm my address and postcode and they give me a new tracking number...

A couple of days later, MY lights get delivered to somewhere in Manchester!!! WTF


ANYWAY, this goes on for about 2 months...  the seller makes 3 failed attempts to get lights to me and finally says he can't try any more as he's losing money and should try to buy from someone else - I get all the money back and start looking at other sellers... and this where it gets weird!

The first seller, ebayer 02COCO removes my address/region from the locations he doesn't deliver to and I can't buy anything from him. I then find a few sellers that have also blocked my location.

I now suspect all these sellers are in fact the same people, as none of them post to here or reply to my emails... So here's a list:
02COCO
04COCO
kbtstudio
hk2015-xiuwe

I finally found a set of lights in a local shop and now all set up to start the VLogging channel so, stay tuned!

And as always - Thanks for reading.


Don't forget to sub to my two YouTube channels at:


And the Vlog channel: www.youtube.com/3ative2